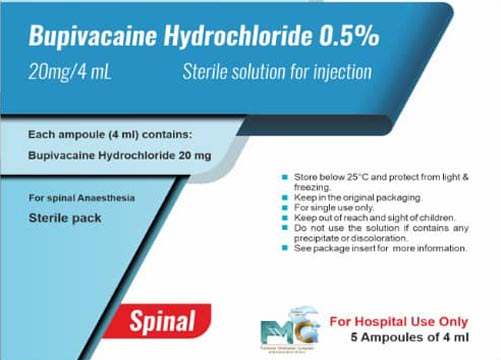 It is a component of anesthetics, the preservative free form of which (without preservative) is used in spinal and epidural anesthesia in surgery. Given that many surgeries are not currently performed under general anesthesia, it is a widely used drug.

Exclusively in the hospital and in the operating room

Bupivacaine is a long-acting anesthetic. The injectable form, which contains a preservative, is not suitable for spinal injection and is less commonly used. In fact, local anesthesia is not widely used for a long time. In peripheral anesthesia, lidocaine, which has a shorter duration of action, is more widely used.
Another drug that is somewhat similar to bupivacaine and is used for epidural anesthesia is ropivacaine. Compared to bupivacaine, it has a similar effect on the sensory nerves, but in motor nerves, the onset time is slower than bupivacaine (which is undesirable), and the duration of action is shorter and the effect is weaker. In general, anesthesiologists prefer to work with bupbocaine.

Due to the fact that the samples of previous domestic production have sometimes had problems in terms of quality and have been recalled, the quality of the product and its ease without problems is helpful for spinal injection. Reclaiming physicians’ confidence in using a domestically produced product is critical to the product’s success.

The drug is used almost exclusively by anesthesiologists in the operating room. Pain specialists may also use bupivacaine to control some pain in combination with other medications, but this is not a very common use.

There are also injectable forms that are not preservative free of the drug that are not as commonly used as described.
There is also a liposomal injectable form of bupivacaine in the world that has an even longer duration of action than non-liposomal bupivacaine. This form may be used to treat severe environmental pain. (For example, after surgery)

The spinal form of the drug is practically more widely used. Liposomal forms and…. Most can be used by pain specialists, which is not very well established in Iran. Apparently, the liposomal form is not yet part of the pharmacopoeia.

Due to the fact that this drug is used by the treatment staff for the patient, it is appropriate to mention in the educational brochures details about the applications, possible side effects, how to use the drug, possible interactions and incompatibilities