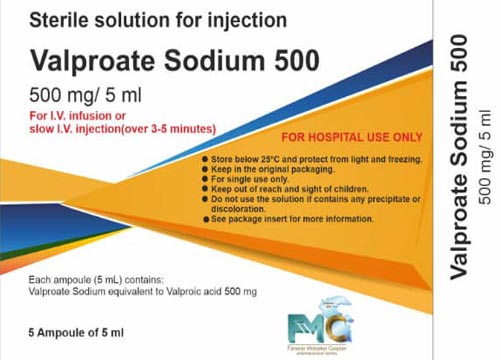 Mostly hospital. But the patient may get it from outpatient pharmacies (usually special pharmacies, of course) and take it to the hospital for use.

Valproate has a wide range of effects. In fact, some doctors use valproate when they have not yet made a definitive diagnosis of the type of epilepsy or seizure. Anticonvulsants each have their own side effects and are typically high-dose medications (especially older anticonvulsants). But Valproat’s wide range of effects is a good thing. Pharmacokinetically, for example, it is better than a drug like phenytoin that follows the so-called zero-kinetics. But at the same time it is not used for many patients in the first line. For example, in patients with traumatic brain injury, which is a common use of injectable anticonvulsants, phenytoin is the preferred drug. In recurrent seizures called status epilepticus, drugs such as injectable lorazepam, phenytoin, and phenobarbital take precedence over valproate.

The use of medication is specialized and is usually prescribed by a subspecialty physician. Information and scientific propaganda for the proper use of the drug is useful for situations that are effective, although the drug is a relatively old drug and is a well-known drug for physicians who specialize in prescribing this drug. Of course, the quality of the product is also important.

There are also solid oral forms of valproate (tablets and syrups). Typically, because patients require long periods of anticonvulsant medication, after a period of time and up to the time of discharge from the hospital, the patient’s medication is changed from injectable to oral form. It is recommended that the injectable form be taken orally no later than two weeks after starting the drug. In fact, they may be more common in some forms of food.

As mentioned, injectable form is used at the beginning of treatment, but then it must be taken orally and each has its own place. Gastrointestinal side effects are common with the oral form of valproate. Hepatic complications are one of the most important complications of valproate, which can be seen both orally and by injection, but it is especially seen in patients under 2 years of age. The comparison of valproate with other seizures has already been explained. A 5-pack for medicine may be appropriate.

Injectable valproate is prescribed and used by the treatment staff for the patient and should contain a brochure with accurate and complete information. About how to administer, incompatibility with other drugs, important drug interactions and applications and possible side effects