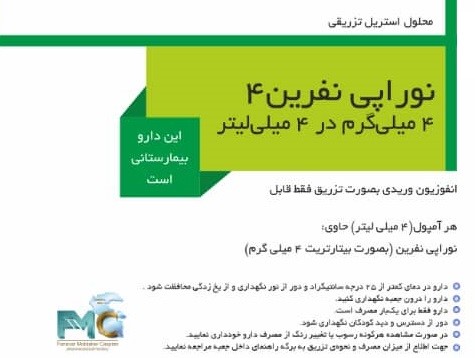 Norepinephrine is a vasoconstrictor used to compensate for slightly acute hypertension. It is also used to treat low blood pressure following cardiopulmonary bypass and heart surgery.

Mechanism of action of norepinephrine

Norepinephrine is a catecholamine that, in small amounts, stimulates the heart muscle and increases cardiac output through the action of beta-one adrenergic receptors. And therefore increases systemic blood pressure and coronary blood flow.

Absorption of this drug after subcutaneous injection is negligible and accumulates mainly in the tissues that receive the sympathetic nerves. Norepinephrine crosses the placenta but does not cross the blood-brain barrier. It is metabolized by COMT and MAO enzymes in the liver, kidneys and plasma. The effect of the drug begins quickly by intravenous injection and disappears 1-2 minutes after stopping the infusion. Norepinephrine is excreted by the kidneys as metabolites, and small amounts of the drug are excreted unchanged.

Side effects of norepinephrine

High blood pressure, headache, bradycardia, arrhythmia and peripheral vascular ischemia have been reported with this drug.

1- This drug should be used with caution in the following cases: Patients with mesenteric or peripheral vascular thrombosis, diabetes, hypoxia or hypercapnia, thyroid disease.
Leakage of the drug into the tissues around the vessel may cause local necrosis due to narrowing of the arteries.
Norepinephrine should only be given by intravenous infusion. Subcutaneous or intramuscular injection of this drug is not recommended due to its vasoconstrictive effect.